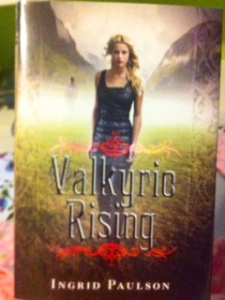 First of all before I get to the review, can we talk about this cover. I mean just look at it, it really sets the setting of the story. Then there is the real cover under the dust-jacket. Look at that engraved title; it’s so pretty. The main reason I even picked up this book was because of the cover (yes I judge books by their covers, who doesn’t). However, I bought it because of the fact it was set in Norway. There aren’t many YA books set there, making it an interesting read.

Inside Cover: Nothing ever happens in Norway. But at least Ellie knows what to expect when she visits her grandmother: a tranquil fishing village and long slow summer days. And maybe she’ll get out from under the shadow of her way-too-perfect big brother, Graham, while she’s there.

What Ellie doesn’t anticipate is Graham’s infuriating best friend Tuck, tagging along for the trip. Nor did she imagine boys going missing amid rumors of impossible kidnappings. Least of all does she expect that something powerful and ancient will awaken in her and that strange whispers will urge Ellie to claim her place among mythological warriors. Instead of peace and quiet, suddenly there’s a lot for a girl from L.A. to handle on summer sojourn in Norway!

I recently read Valkyrie Rising, and I have to say I quite enjoyed it. It is about a sixteen year old girl named Elsa (Ellie) who goes to Norway for the summer to visit her grandmother with her older, and very protective brother Graham. What she never expected was his infuriating best friend, Tucker, to tag along. Normally nothing ever happens in Norway, but then she is suddenly thrown into a world where boys are disappearing and strange things start to happen.

Norse Mythology plays a key role in the telling of the story. Loki and Odin are mentioned and play key roles themselves. Ingrid Paulson has a different way of describing these two characters and other Norse mythological beings that made this story very interesting.

The characters were so well written and every action they committed fitted towards their personality. Graham was perfectly written as the over-protective brother, all his actions made sense towards this personality. I liked the main character the most; I found I could relate to her quite easily. She wasn’t your average protagonist. Sure she isn’t a partier, but there is no problem in that. That is why I liked her, because she is like me in that sense. As well, there is the ever charming Tuck, he has become one of my new favourite male characters in a book.

I gave this book five stars but not just because I thought the characters were well written, but because I enjoyed the story. The story flowed smoothly for me, and I read it in less than two days. It was gripping and exciting and the action was different than most books I have read (being that it is nearly done by all females). Kick-butt female warriors and mythology, you can sign me up any day. The best thing about this book was that it wasn’t a girl who was the damsel in distress

Overall, I would definitely recommend this book to anyone who liked the writing style of Julie Kagawa in the Iron Fey, as well as anyone who enjoys Norse Mythology. Any Loki fans out there will love this.
I really liked this book and I really need a sequel. There is some major stuff still in store I can just tell it would be good. This is a message to Ingrid Paulson, please write more books!

If you want to see my spoiler review click here